At the heart of the largest island of the Philippines is Tarlac, a synergy of the four provinces surrounding this vast land of cane fields and rice plantations.

Tarlac takes on the cultures of Pangasinenses from its north, Ilocanos of Nueva Ecija on its east, Tagalogs of Zambales from its west and finally, Kapampangans from the south.

There is much folklore on the origin of its name. The most recognized is its deriviation from the Aeta world “Malatarlak” which refers to the wild cogon grass that greeted the Aetas when they first stepped into the land which is now Tarlac. Aetas were the earliest occupants of Luzon and moved throughout as nomads in search for food.

The land of Tarlac was formed when volcanic eruptions created the Zambales Range. This range was once an island separated from the rest of what is now Luzon by a strait from the Lingayen Gulf to the Manila Bay. From the continual activity of the volcanoes, its sand rested on the Zambales Range over the strip of the sea. There emerged Tarlac Province, a wide, flat, reclaimed land area, part of the great central plains of Luzon. Some great valleys of land became water where passenger canoes floated during the flood seasons from Manila Bay to Lingayen Gulf.

Although its plains have been formed millions of years ago, Tarlac is a relatively young province, being the last in Central Luzon to be organized under the Spanish government. Until 1874, Tarlac was a part of Pangasinan and Pampanga. Nevertheless, the province earned itself one of the eight rays of the sun on the Philippine flag which symbolizes the first provinces to revolt against Spain in 1896.

Tarlac is historic for its role in the fight for the country’s emancipation. The first President, Gen. Emilio Aguinaldo, proclaimed it as the seat of power of the first Philippine Republic in March 1899 when he fled the former capital, Malolos, Bulacan. But this only lasted a month as he was chased to Nueva Ecija by the Americans. On November 1899, Tarlac was captured by the American forces.

During World War II, Camp O’Donell in Capas became the terminal point of the Bataan Death March where Filipino and American soldiers surrendered to Japanese troops in 1942. It was not until early 1945 when military forces liberated Camp O’Donell and rescued the prisoners of war in Capas.

Decades after, the province has progressed significantly, leading to its becoming one of the progressive provinces in Central Luzon. This brief account of Tarlac’s colorful history is by no means complete. It has encountered countless hardships in the course of its existence, including those precipitated by earthquakes, cholera and other epidemics, great fires, devastating floods and similar calamities. Tarlac continues to write history.

Through the years, Tarlac’s ability to survive wars, economic difficulties and political turmoil, among others, has been proven by its consistent re-emergence as a stronger and better Tarlac, eager to meet the challenges of tomorrow.

Past Governors of Tarlac 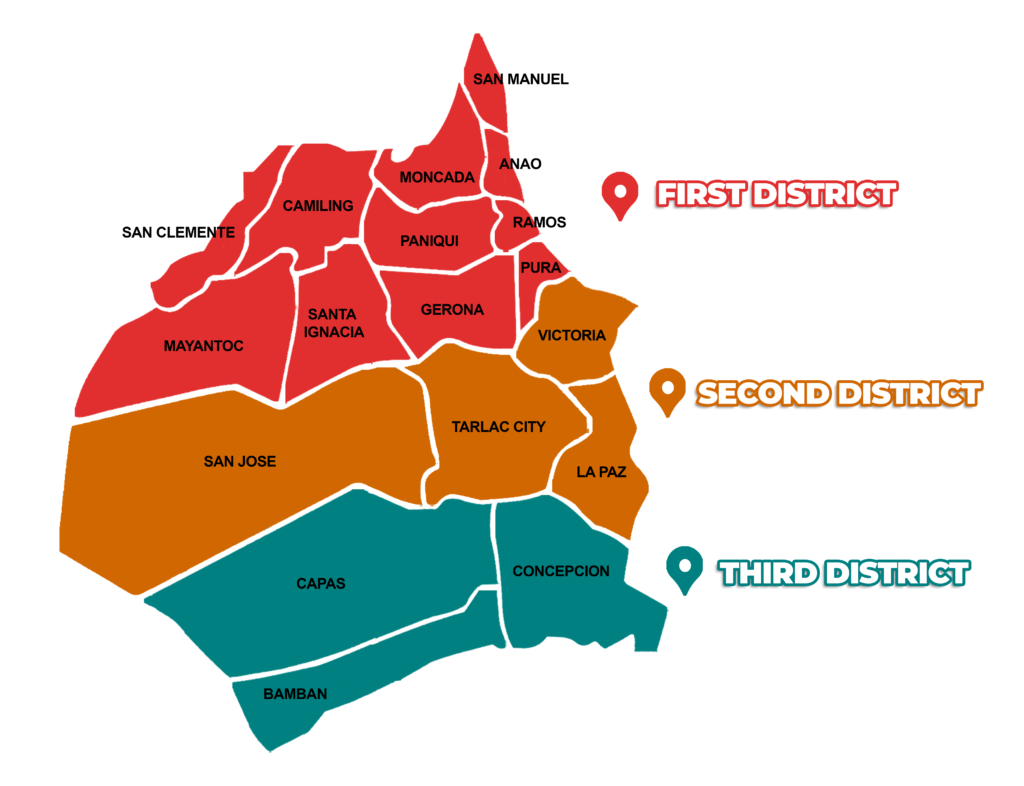 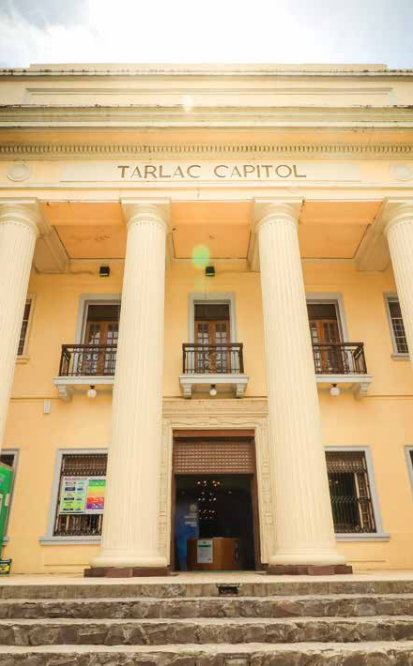 Tarlac province is 2 ½ hours away from the Capital City Manila. It is a multi-cultural province composed of seven heritage cultures – Kapampangans, Pangasinenses, Ilocanos, Tagalogs, Fil-Chinese, Muslims, and Aetas

Tarlac Province has a total of seventeen towns and one city. The City of Tarlac is classified as a small city given its improvements in facilities and services over the last decade. It is the provincial industrial center where all institutions are present and thriving including shopping centers, supermarkets, financial institutions, housing estates and subdivisions, recreational centers, tertiary education and public and private health centers.

The municipalities of Camiling, Paniqui, Capas and Concepcion are classified as large towns. Each have over 50,000 population and exhibit primary and commercial centers.

The municipalities of Moncada, Victoria, Sta Ignacia, La Paz, Gerona, San Jose, Mayantoc, and Bamban are medium towns or secondary urban centers that each have over 25,000 population and are rich in mineral, agricultural, fisheries, and forest resources. Lastly, the municipalities of San Manuel, Anao, San Clemente, Ramos and Pura are classified as small towns each with over 5,000 population and are considered food production and rural service resources.

Tarlac is home to a diverse set of attractions ranging from historical and natural sites to progressive developments.

Known as the melting pot throughout the 80s and 90s, and being landlocked, Tarlac Province has slowly etched its mark as a destination for eco-tourism, historical monuments, natural scenery, and unique adventure spots.

From the south coming straight from Pampanga, the steel structure bridge of Bamban welcomes you. Built as part of the disaster restoration works for the National Highway, the 174-meter long Bamban bridge boasts of being the first of the Basket Handle Nielsen-Lohse bridge in the country. It is also one of the longest of its type in the world. Bamban is also host to a 4-hectare Greco-Roman inspired architecture within Goshen Resort alongside the Ohnishi cave and natural sites like Haduan Falls, Sacobia Falls, Malasa Spring and Kebaldugan Tandos River. 20 kilometers down north is the town of Capas which has two important historical sites in Philippine history – the Capas Death March Monument, which is built in an inverted

V structure symbolizing the heroism of Filipino and American soldiers during World War II; and the Capas National Shrine, which is a massive obelisk commemorating the heroism of Filipino veterans during WWII. Outside of its historical prominence, Capas is also known for its tourist destination with the famous Mt. Pinatubo Crater adventure and the New Clark City development.

In the center of Tarlac and the only city of the Province, Tarlac City offers a variety of sites. First is the Provincial Government Office with its Roman-inspired pillar structure at the frontage and the Tarlac Cathedral which dates back 1872 from a wood and stone structure. There are also two museums located in Tarlac City – The Aquino Center Museum which is a tribute to the late Senator Ninoy Aquino and the late President Cory Aquino. Diwa ng Tarlac on the other hand, is focused on showcasing contemporary art pieces apart from its convention hall and ballroom. There is also a golf course located in the Hacienda Luisita complex.

To the west of Tarlac is the town of San Jose which has a good mix of religious, adventure and sport activities. On top of Mount Resurrection is the Monasterio de Tarlac where the relic of the

True Cross and the colossal structure of the Risen Christ can be found. The Jose V. Yap Sports and Recreational Complex formerly known as Tarlac Recreational Park is also situated in this town. It offers a wide range of sports and outdoor activities such as running around the oval track, biking on uphill or downhill landscapes, kayaking, fishing by the lagoon, swimming in the Olympic size pool, and camping, among others. About 50 kilometers northwest is the town of Mayantoc which is known to be the summer capital of Tarlac. Mayantoc has abundant natural wonders to offer such as the ageless river of San Bartolome, the Labney’s Peak along with its rice terraces, the Nambalan river, the Anzap Twin falls, and the Calao Falls and Spring Water.

Roman Catholic is the dominant religious affiliation in the province. It is 81.06% of total population. This is the reason why there are numerous catholic churches across Tarlac.

Tarlac offers the adventure you are looking for with the right mix of history, religion, sports, and nature.

Bamban Bridge
Located next to Marimta river and weighs 1400 tons

Tarlac Capitol or Provincial Capitol Building
Located at Capitol site street San Vicente Tarlac City. Present structure was completed in 1909. The capitol façade is one of the highlights of the 500 Philippine Peso bill

Museo de Tarlac or Museo ng Tarlac
The museum has extensive official documents from well-known revolutionary figures who hail from Tarlac including the winning entries from the annual Belen-making competition.

Diwa ng Tarlac Convention Center
Located at Romulo Boulevard, San Vicente, Tarlac City. Gov. Susan A. Yap is an advocate of the arts and continues to cultivate art appreciation through festivals and exhibits.

The Aquino Center
The Museum houses the memorabilia of two prominent Filipinos: Senator Benigno “Ninoy” Aquino and President Corazon “Cory” Aquino. The museum records the factual history, their fight to restore democracy and the People Power Revolution that inspired the world.

Jose V. Yap Sports and Recreational Complex
Is the brainchild of the late Gov. Jose V. Yap. It was a joint project with the Provincial Government of Tarlac through Gov. Victor A. Yap. It was the venue of the Palarong Pambansa in 2010.

New Clark City (NCC) Athletics Stadium will has 400-meter standard track and nine-lane world class track and field facility. It’s design is inspired from the crater of Mt. Pinatubo, the Stadium’s ringed floorline looks like a crater opening towards the sky. The chairs, on the other hand, have orange and gray colors arranged to create the overall visual effects of flowing lava.